Pasu! We finally got the first real PV for the anime series „Shuumatsu Nani Shitemasu ka? Isogashii desu ka? Sukutte Moratte Ii desu ka?“ based on the light novel with the same name. And I can say for sure, that I am really excited. The PV looks so good and the song is just a perfect fit for it.

As a light novel reader who read 2 of the 3 (as of this writing) translated volumes, I can also say that this will be a great story. The only way to mess it up would be using a bad pacing. Aside that, I can totally see this show becoming my favorite of the spring season of 2017.

A lot of sweet drama, despair and a really nice depiction of depression.

First: I’ve finished volume 4 of Kazuma Kamachi’s Mitou Shoukan://Blood Sign which was seriously great. I really enjoyed how he threw the protagonist into despair at the end of the volume. It was said from the first volume that the White Queen (picture below) is the strongest being and that the protagonist caused half of the world’s chaos. But in volume 4 it was also said that he is the strongest along side the White Queen. I’m really excited to see more of it. And hey, J.C. Staff.. give us already an anime adaptation for Blood Sign!

Second: I’ll probably record a video (read as: I’ll talk while I’m recording my desktop activity) for the upcoming anime season! There are a lot of titles I’ll pick up!

Third: Neko from Masamune-kun no Revenge annoys me but she’s „ok“ when it comes to comedy scenes.

Pasu! I’m currently catching up with Masamune-kun no Revenge.. and a new character was introduced.. and she annoys me so much. Her entire character makes me angry. And I can’t even say if this is because of her character in the story or if it is just really lame and bad writing.. I can’treally tell..

And yes, I’m talking about Neko aka Nopan-girl. Her only good screentime was the nopan-scene in the classroom.. aside that… she makes me just angry.

I really enjoyed the show at the beginning but since she showed up I’m more and more irritated.. even the comedy moments are not helping that much. I want to cry. Literally.

Fun fact: I tend to enjoy Seo’s stuff. Suzuka was nice and Kimi no Iru Machi was quite enjoyable too! (At least I have to be in the mood for that kind of stuff)

Pasu! After a great episode of Demi-chan and a nice cup of coffee, it’s time to write a bit about it. This episode had some drama in it, but not some 0815 melo-drama but in fact, relatable and down to earth drama.

The vice-principal talked with Takahashi about how he was trying too hard and that it is also not the best thing. Basically, it was about that the demis are relying „too much“ on him and that they should figure out how to solve problems.

It’s not that the vice-principal is wrong at all… in fact, he changed his mind when he saw the other students interacting with the demis and how it would be bad to complain about a teacher who inspires other students. And I totally agree.

The video that the girls made was also cute. Sakki was quite troubled, huh? I hope, I really hope that we’d get the Takahashi x Sakki ending.. *nods nods*

Hey there, it’s Monday (okey, it’s Tuesday morning – 01:57) and this means it is time for a new episode of Gabriel DropOut. And it was hilarious! I’m seriously afraid to meed Raphi’s and Gab’s family.. the servant of Raphi was strange enough to change a character for the rest of the life.

Satania’s parents are both delusional about their great demonic lineage. And their secret elixir turns out to be not an elixir.. but baked stuff.. Yep, they have a bakery. The seemingly normal son is screwed in its own right. D:

Vigne’s parents are nice and lovely. She’s totally like them. Chappy-chan is cute.. but huge!

And the principal reminds me of the KFC guy.. *sparkles* 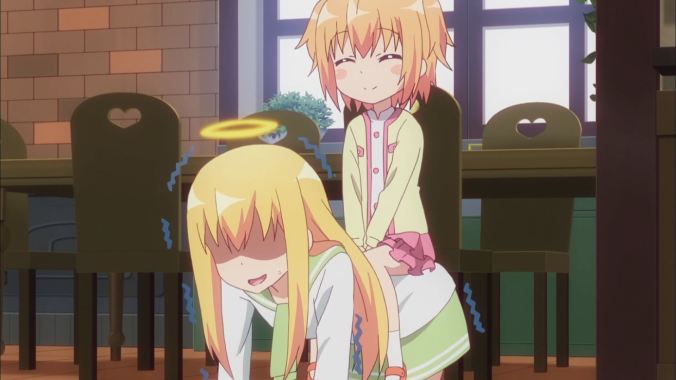 Pasu! After todays episode of Demi-chan, I really have to ask.. Sci-fi ho? It makes sense that they are curious about the Dullahan.. but this was kinda strange.. „hiding“ the neck in another dimension? Wormhole? Sure, why not…, I guess?

On the other side, Hikari is still doing her best at being a happy go lucky girl who wants to enjoy herself a lot! And this time, she played with Machi’s body! Machi’s facial expression was really cute. 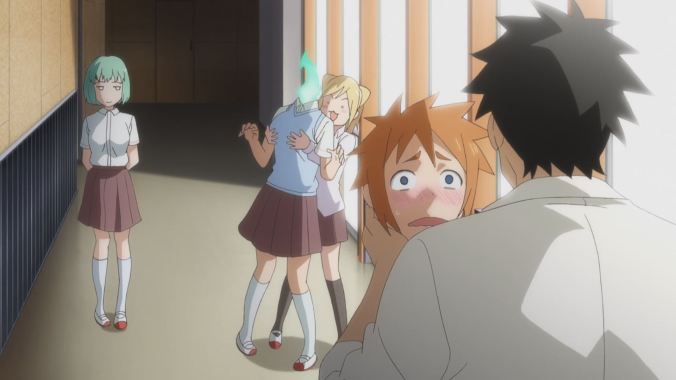 Pasu! I sat down today and watched yesterdays episode of Kobayashi’s Maiddragon. And holy mother, what can I say… Kobayashi got some nice development and Kanna is as cute as ever while she’s growing up.

I really like how Kanna sees Tohru as an older sister and Kobayashi as a mother figure. And it’s quite sad if you think about Kanna’s situation.. she was banished because she played pranks just to get the attention from her parents. *sobs*

But on the other side, she found a great one in Kobayashi! And Kobayashi started to realise how she changed and yet, she don’t know when it was. The truth behind growing up or changing. You can see the difference but you don’t really know when it happened.

It was a wonderful episode. ❤

Pasu! I’ve just finished the Christmas / New Year episode of Gabriel DropOut! And I’m happy to see Gab’s trumpet back in business! And she got drunk! I never thought that angels would get drunk!

Satania tried to be kinda anti-Christmas but she couldn’t do it. Vigne and Raphi were way too strong. Or it is because Satania is an airhead. I wonder if we’ll get Satania’s happy end of eating the melon bread! 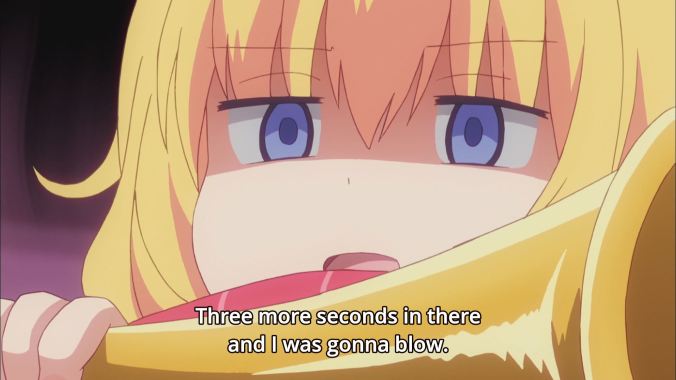 Can I get that trumpet for crowded places too?!

Pasu! The English version of Purple Software’s Chrono Clock was released a couple of days ago and I couldn’t help but to try it. And so far, it really is an enjoyable read. I’m on Michiru’s route right now which is also the first heroine route that I have picked up. Long story short – the only routes that I’ve read so far is the Prologue and the Common route. 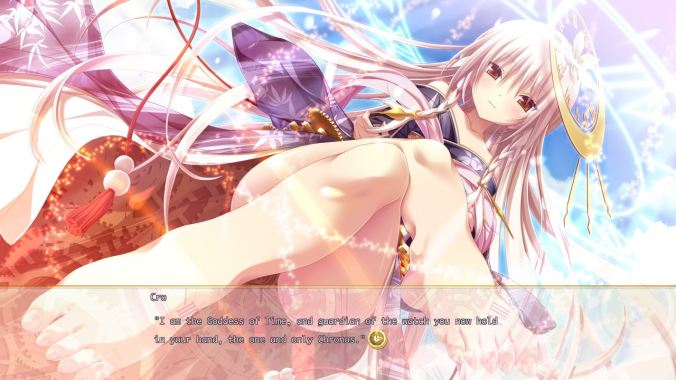 We have the theme of time travel in this story which might put some people off, but I don’t care about the themes as long as it is entertaining and enjoyable. Rei, the protagonist of the story got a pocket watch that was from his grandfather and everytime the pocket watch breakts, he can go back to the past by 5 minutes, once an hour. It may sound cool but can you really change that much in the last 5 minutes? This is also a question that Rei asked himself. Not only that, but he also asks his friends how far they’d travel back in time to change their life.

So far, it’s not an overall serious story since the prologue and the common route is 99,9% comedy. The characters are likeable and the protagonist, Rei, is seriously funny and quite perverted. *salutes*

I’m looking forward to the events of the heroine routes.

Pasu! After calming down after 20+ minutes of laughing, I’m able to write a few lines for todays post. Let’s go with „IT’S SO GOOD!“ and „JOIN THE CULT!“.

Darkness would be the best (= most consistant) performing player if she’d be in my guild. While most people would have good days, bad days, good encounter and bad encounter.. Darkness would enjoy every part as long as it’s a pain in the neck. Damn.. I want her to join the guild. And surprisingly.. that joke with her masochistic side doesn’t get old.

I figured that much out.. if the goddess is a crazy stupid annoying being, the Cult can’t be better. And it was proven in this episode! And it was also surprising that the joke with the „Join the Axis Church“ didn’t get old. It was a great episode and I had a lot of fun with it.