today I want to take a look at the „famous“ sport anime about badminton which is airing in the summer season of 2018. It’s Hanebado, a great looking and well animated show. But if we look past the visual aspects of the show, it quickly falls apart and it becomes clear that this one is just a bad melodramatic story that could be put on the same page of r/im14andthisisdeep.

The problem of this show lies with the characters and their relationships. I know that you need rivals for a sport anime to work but this does not mean that everyone has to be a prick. I enjoy a good show if there are rivals with a healthy relationship (Hi @ Harukana Receive for doing this right) but I find it really hard to watch Hanebado when everyone is just an asshole for no reason other than „this is deep and they are rivals“.

I played both tennis and badminton in a club for many years but you just don’t see such a shitshow in reallife. We should also take a look at the teacher/coach because they are just as bad as the all the pricks of this show. Our coach never ignored it when there was trouble between the peoples back in the club simply because it would affect the team in a negative way. Seeing the Angry Chick shouting all day long and being angry for no reason other than „I have to get stronger“ annoys the hell out of me. She should be the first one to be put in place by the teacher for harming the team. 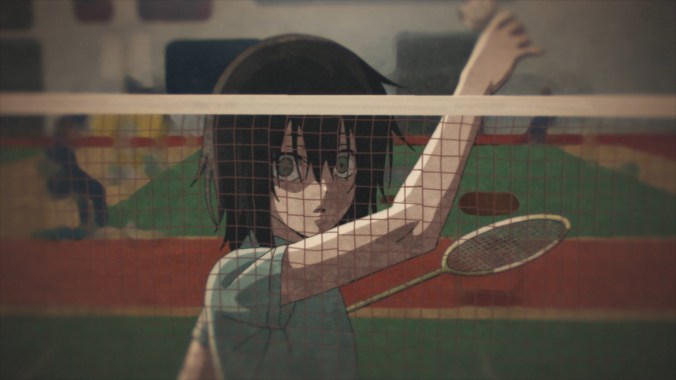 Speaking of Angry Girl.. it’s new to me that you can have PTSD just because you lost in a match, seriously. Another girl that annoys me is Ayano’s best friend who is forcing her into the club just because Ayano has talent even though she doesn’t want to join. And no, having talent is not a reason to be forced into the club. And no, having talent doesn’t mean she has to be forced into this shit just because it is for the greater (lol) good. This puts Ayano’s best friend on the same level as every other prick of this show.

There are other points that are making this a bad show for me, but I’ll just say something that is good about this anime. It’s the quality of the animation and how good the matches are. It looks so good which is even more frustrating when everything else is just annoying and ruins the fun.

Feel free to give Hanebado: Everyone Is An Asshole The Animation a try.